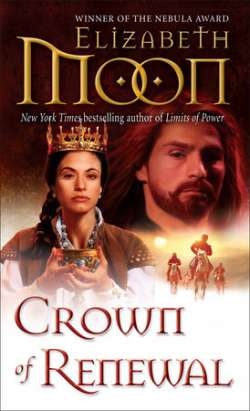 The mysterious reappearance of magery throughout the land has been met with suspicion, fear, and violence. In the kingdom of Lyonya, Kieri, the half-elven, half-human king, struggles to balance the competing demands of his heritage while fighting a deadly threat to his rule: evil elves linked in some way to the rebirth of magic.

Meanwhile, in the neighboring kingdom of Tsaia, a set of ancient artifacts recovered by the former mercenary Dorrin Verrakai may hold the answer to the riddle of magery’s return. Thus Dorrin embarks on a dangerous quest to return these relics of a bygone age to their all-but-mythical place of origin. What she encounters there will change her in unimaginable ways—and spell doom or salvation for the entire world.

Praise for Crown of Renewal

“Mesmerizing . . . [Elizabeth] Moon offers convincingly realized characters persuasively shaped by the extraordinary richness, depth and texture of the world they inhabit. . . . Such is the allure of an extremely talented writer at the the height of her powers.”—Kirkus Reviews (starred review)

“Thoughtful and deeply character driven, full of personal crises as heartbreaking and hopeful as any dramatic invasion . . . Fantasy fans will be delighted by this impressive foray.”—Publishers Weekly (starred review)

“This is an excellent series, and Echoes of Betrayal is particularly well done. [Moon is a] consistently entertaining writer, and this book lives up to her standards.”—San Jose Mercury News

Kings of the North

“Her storytelling is as electrifying as ever, and her readers should be delighted with this new vista of a well-known world.”—Booklist