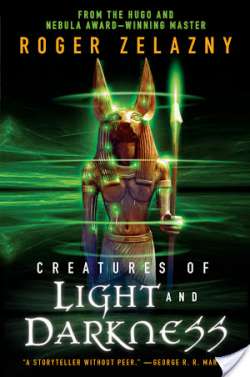 Creatures of Light and Darkness

Two gods, two houses, one quest, and the eternal war between life and death To save his kingdom, Anubis, Lord of the Dead, sends forth his servant on a mission of vengeance. At the same time, from The House of Life, Osiris sends forth his son, Horus, on the same mission to destroy utterly and forever The Prince Who Was a Thousand. But neither of these superhuman warriors is prepared for the strange and harrowing world of mortal life, and The Thing That Cries in the Night may well destroy not only their worlds, but all mankind. As Zelazny did with the Hindu pantheon in the legendary, groundbreaking classic Lord of Light, the master storyteller here breathes new life into the Egyptian gods with another dazzling tale of mythology and imagination.