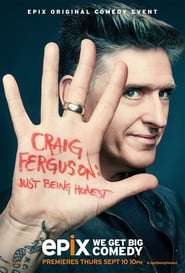 Comedian and Emmy-winning television host Craig Ferguson brings equal parts satire and silliness to the stage in his second comedy special for EPIX. Performing on stage at the historic Town Hall in New York City, Ferguson offers hilarious insights on religion, aging, and of course the big three: sex, drugs and rock & roll—including his own delightfully surreal experiences with Mick Jagger and Kenny G.