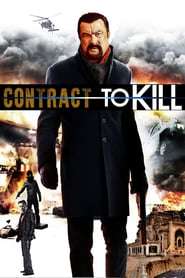 Harmon is a CIA/DEA enforcer investigating Arab terrorists captured in Mexico. With his team--seductive FBI agent Zara and spy-drone pilot Sharp--he flies to Istanbul and uncovers a brutal plot: Islamic extremists plan to use Sonora drug-smuggling routes to bring deadly weapons, and leaders, into the U.S. To prevent an attack on America, Harmon must turn these two savage forces against one another before his time--and his luck--run out.

How To Watch Contract to Kill