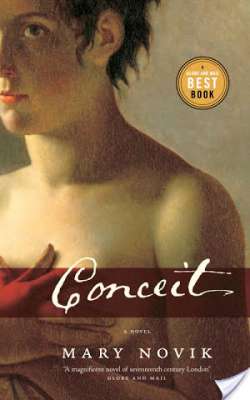 "St Paul's cathedral stands like a cornered beast on Ludgate hill, taking deep breaths above the smoke. The fire has made terrifying progress in the night and is closing in on the ancient monument from three directions. Built of massive stones, the cathedral is held to be invincible, but suddenly Pegge sees what the flames covet: the two hundred and fifty feet of scaffolding erected around the broken tower. Once the flames have a foothold on the wooden scaffolds, they can jump to the lead roof, and once the timbers burn and the vaulting cracks, the cathedral will be toppled by its own mass, a royal bear brought down by common dogs." (p.9) It is the Great Fire of 1666. The imposing edifice of St. Paul's Cathedral, a landmark of London since the twelfth century, is being reduced to rubble by the flames that engulf the City. In the holocaust, Pegge and a small group of men struggle to save the effigy of her father, John Donne, famous love poet and the great Dean of St. Paul's. Making their way through the heat and confusion of the streets, they arrive at Paul's wharf. Pegge's husband, William Bowles, anxiously scans the wretched scene, suddenly realizing why Pegge has asked him to meet her at this desperate spot. The story behind this dramatic rescue begins forty years before the fire. Pegge Donne is still a rebellious girl, already too clever for a world that values learning only in men, when her father begins arranging marriages for his five daughters, including Pegge. Pegge, however, is desperate to taste the all-consuming desire that led to her parents' clandestine marriage, notorious throughout England for shattering social convention and for inspiring some of the most erotic and profound poetry ever written. She sets out to win the love of Izaak Walton, a man infatuated with her older sister. Stung by Walton's rejection and jealous of her physically mature sisters, the boyish Pegge becomes convinced that it is her own father who knows the secret of love. She collects his poems, hoping to piece together her parents' history, searching for some connection to the mother she barely knew. Intertwined with Pegge's compelling voice are those of Ann More and John Donne, telling us of the courtship that inspired some of the world's greatest poetry of love and physical longing. Donne's seduction leads Ann to abandon social convention, risk her father's certain wrath, and elope with Donne. It is the undoing of his career and the two are left to struggle in a marriage that leads to her death in her twelfth childbirth at age thirty-three. In Donne's final days, Pegge tries, in ways that push the boundaries of daughterly behaviour, to discover the key to unlock her own sexuality. After his death, Pegge still struggles to free herself from an obsession that threatens to drive her beyond the bounds of reason. Even after she marries, she cannot suppress her independence or her desire to experience extraordinary love. Conceit brings to life the teeming, bawdy streets of London, the intrigue-ridden court, and the lushness of the seventeenth-century English countryside. It is a story of many kinds of love — erotic, familial, unrequited, and obsessive — and the unpredictable workings of the human heart. With characters plucked from the pages of history, Mary Novik's debut novel is an elegant, fully-imagined story of lives you will find hard to leave behind. From the Hardcover edition.