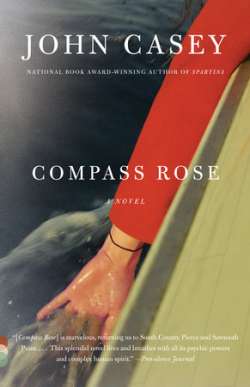 It’s been more than two decades since Spartina won the National Book Award and was acclaimed by critics as being “possibly the best American novel . . . since The Old Man and the Sea” (The New York Times Book Review), but in this extraordinary follow-up novel barely any time has passed in the magical landscape of salt ponds and marshes in John Casey’s fictional Rhode Island estuary.

Elsie Buttrick, prodigal daughter of the smart set who are gradually taking over the coastline of Sawtooth Point, has just given birth to Rose, a child conceived during a passionate affair with Dick Pierce—a fisherman and the love of Elsie’s life, who also happens to live practically next door with his wife, May, and their children. A beautiful but guarded woman who feels more at ease wading through the marshes than lounging on the porches of the fashionable resort her sister and brother-in-law own, Elsie was never one to do as she was told. She is wary of the discomfort her presence poses among some members of her gossipy, insular community, yet it is Rose, the unofficially adopted daughter and little sister of half the town, who magnetically steers everyone in her orbit toward unexpected—and unbreakable—relationships. As we see Rose grow from a child to a plucky adolescent with a flair for theatrics both onstage and at home during verbal boxing matches with her mother, to a poised and prepossessing teenager, she becomes the unwitting emotional tether between Elsie and everyone else. “Face it, Mom,” Rose says, “we live in a tiny ecosystem.” And indeed, like the rugged, untouched marshes that surround these characters, theirs is an ecosystem that has come by its beauty honestly, through rhythms and moods that have shaped and reshaped their lives.

With an uncanny ability to plunge confidently and unwaveringly into the thoughts and desires of women—mothers, daughters, wives, lovers—John Casey astonishes us again with the power of a family saga.