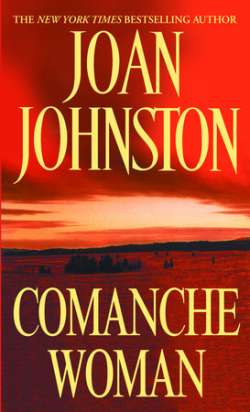 In this dazzling prequel to the New York Times bestsellers The Cowboy and The Texan, Joan Johnston takes us back to a time when Texas was a young and wild republic, and three strong-willed sisters carved out a destiny that would spawn two legendary dynasties. Here is the spellbinding tale of a woman captured by Comanches—and of the proud warrior who vows to make her love him.

Born to a white father and his Indian bride, Long Quiet believed his destiny lay with his Comanche brothers. But his heart secretly belonged to Bayleigh Stewart, daughter of the richest cotton planter in Texas, who’d been abducted by a marauding brave and sold to the highest bidder. For years he’d searched for the violet-eyed beauty, and now a strange twist of fate led him to her.

Called Shadow by her captors, Bay had almost given up hope of rescue, when a rugged stranger in buckskins appeared, risking his life to bring her home...and awakening a passion that burned hot and true. Bay knew her place was with her family. But Long Quiet hadn’t found her only to lose her again. He had to convince this woman—his woman—that her true home was with him... as together they would fight for a love strong enough to bridge two worlds....