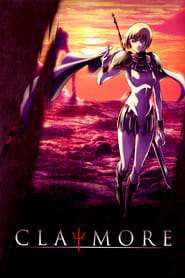 Claymore is a dark fantasy manga series written and illustrated by Norihiro Yagi. The series initially premiered in the now defunct Monthly Shōnen Jump in the May 2001 issue. When the magazine was canceled in June 2007, the series was temporarily moved to Weekly Shōnen Jump where it was still published monthly. When Jump Square was introduced in November 2007, the series was moved to it. The individual chapters are published in tankōbon volumes by Shueisha, with 23 volumes released as of December 2012. Madhouse adapted the first eleven volumes of the series into a twenty-six episode anime series. Directed by Hiroyuki Tanaka the series premiered in Japan on NTV on April 3, 2007 and ran until September 25, 2007. A CD soundtrack for the anime series, and a CD of character songs using the anime voice actresses were released on July 25, 2007 and September 27, 2007, respectively. The Claymore manga is licensed for an English language release in North America by Viz Media. It released the first volume of the series on April 4, 2006 and has released 21 volumes as of November 6, 2012. The anime adaptation is licensed for release in North America by Funimation Entertainment, which has released the first DVD for the series in Fall 2008 and released the entire series on Blu-ray in Spring 2010. Madman Entertainment has licensed the anime for release in Australia and New Zealand and the anime is sub-licenced by Manga Entertainment for UK distribution.

How To Watch Claymore