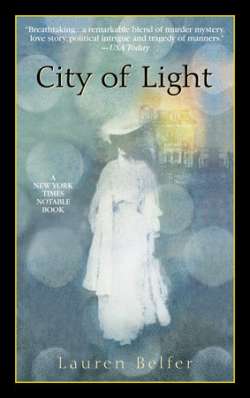 It is 1901 and Buffalo, New York, stands at the center of the nation's attention as a place of immense wealth and sophistication. The massive hydroelectric power development at nearby Niagara Falls and the grand Pan-American Exposition promise to bring the Great Lakes "city of light" even more repute.

Against this rich historical backdrop lives Louisa Barrett, the attractive, articulate headmistress of the Macaulay School for Girls. Protected by its powerful all-male board, "Miss Barrett" is treated as an equal by the men who control the life of the city. Lulled by her unique relationship with these titans of business, Louisa feels secure in her position, until a mysterious death at the power plant triggers a sequence of events that forces her to return to a past she has struggled to conceal, and to question everything and everyone she holds dear.

Both observer and participant, Louisa Barrett guides the reader through the culture and conflicts of a time and place where immigrant factory workers and nature conservationists protest violently against industrialists, where presidents broker politics, where wealthy "Negroes" fight for recognition and equality, and where women struggle to thrive in a system that allows them little freedom.

Wrought with remarkable depth and intelligence, City of Light remains a work completely of its own era, and of ours as well. A stirring literary accomplishment, Lauren Belfer's first novel marks the debut of a fresh voice for the new millennium and heralds a major publishing event.