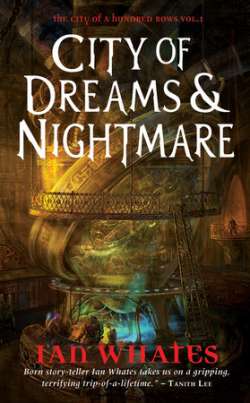 THEY CALL IT "THE CITY OF A HUNDRED ROWS".

City of Dreams & Nightmare is the first in a series of novels set in one of the most extraordinary fantasy settings since Gormenghast - the ancient vertical city of Thaiburley. From its towering palatial heights to the dregs who dwell in The City Below, this is a vast, multi-tiered metropolis, and demons are said to dwell in the Upper Heights...

Having witnessed a murder in a part of the city he should never have been in, street thief Tom has to run for his life. Down through the vast city he is pursued by sky-borne assassins, sinister Kite Guards, and agents of a darker force intent on destabilising the whole city. Accused of the crime, he must use all of his knowledge of this ancient city to flee a certain death; his only ally is Kat, a renegade like him, but she has secrets of her own...