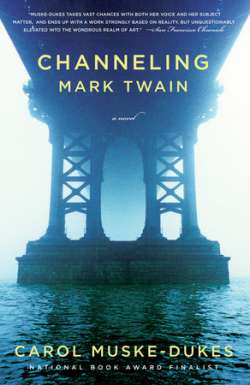 Fresh out of graduate school, Holly Mattox is a young, newly married, and spirited poet who moves to New York City from Minnesota in the early seventies. Hoping to share her passion for words and social justice, she decides to teach poetry at the Women’s House of Detention on Rikers Island, only minutes from Manhattan. There Holly meets a woman who will change her life forever: Polly Lyle Clement, an inmate who claims that she is a descendant of Mark Twain and is capable of channeling his voice. As Holly is caught up in the drama of her students’ lives, her identification with their despair leads her to lose all perspective on the nature of justice. And when she is drawn into an affair with a fellow poet, Holly risks all that is familiar and conventional in her life.

“Muske-Dukes takes vast chances with both her voice and her subject matter, and ends up with a work strongly based on reality, but unquestionably elevated into the wondrous realm of art.”
–San Francisco Chronicle

“This is a novel that asks all the right questions–about writing, about life, about our common humanity.”
–The Times-Picayune

“Muske-Dukes shows us there is something magical and mighty in the connections that art can forge among human beings.”
–Los Angeles Times Book Review