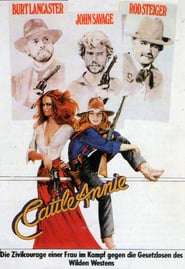 Cattle Annie and Little Britches is a 1981 American film[1] starring Burt Lancaster, Rod Steiger, Diane Lane, and Amanda Plummer, based on the lives of two adolescent girls in the late 19th century Oklahoma Territory, who became infatuated with the Western outlaws that they had read about in Ned Buntline's stories and left their homes to join the criminals. It was scripted by David Eyre and Robert Ward from Robert Ward's book and directed by Lamont Johnson.