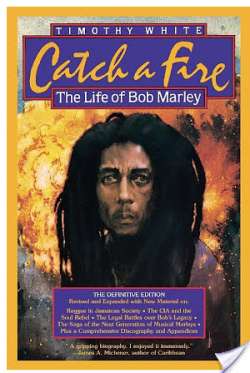 Catch a Fire: The Life of Bob Marley

Bob Marley was the undisputed sovereign of reggae music and a revolutionary soul-prophet whose music continues to have a major impact on people of throughout the world. Catch A Fire chronicles Bob Marley's life and career, as well as the zeitgeist that shaped his spiritual and political beliefs. Presented here is not simply the journey Bob Marley undertook himself, but also the societal frameworks he railed against, the philosophy he espoused and fascinating insider-information on the intrigues of the reggae music business. Written by Timothy White, fully revised and expanded, this 2006 edition of Catch A Fire paints a rich tapestry of the triumph and tragedy surrounding one of the most important and influential figures of the 20th century. “There isn’t another book that gives as full and accurate a portrait of reggae culture. This is a biography no serious pop fan should be without.” —J. D. Considine, The Baltimore Sun “The strange island of Jamaica with its obeah spells, cosmic coincidences, and tragic fatalism is rendered with a gifted, accurate touch that recalls the best of García Marquez.” —Chris Salewicz, The Face “Aloof, cagey, proud, funny, Marley has been made human in this book. He’s no longer just a fierce-eyed legend who died too soon.… One of the most vivid portraits of a pop artist ever written.” —Ken Tucker, Knight-Ridder Newspapers