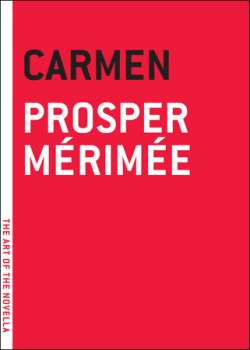 The novella that was the basis for perhaps the most popular opera of all time, Prosper Mérimée’s Carmen is the swashbuckling story of a nineteenth-century Spanish soldier who deserts his post to pursue the fiery gypsy beauty, Carmen—who is as brave as she is fickle.

The opera’s plot, it turns out, is based only on part of the larger adventure that is Carmen. The story opens, for example, with the narrator, a historian like Mérimée, researching the lost site of an ancient Roman battle on the plains of Andalusia, when he meets a notorious bandit, Don José Navarro, on the run from the law. Feeling a certain sympathy for Don José, whose face is “at once noble and fierce,” and a vicarious thrill at this brush with danger, he helps the bandit to escape.

When they next meet again, Don José is in jail in Cordova, due to be hanged for his crimes. In his last days, he tells the narrator about a wild gypsy woman he met back in Seville . . .

What follows is an iconic and highly entertaining tale of doomed passion full of chases, sword fights, bullfights, smuggling, wild dancing, and more—except no mezzo-sopranos.