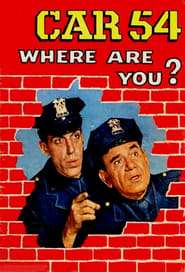 Car 54, Where Are You? is an American sitcom that ran on NBC from 1961 to 1963, and was about two New York police officers based at the fictional 53rd precinct in The Bronx. Car 54 was their patrol car. The show was filmed only in black-and-white. Episodes had different directors, the most recognized being Al De Caprio. Stanley Prager and Nat Hiken also directed several episodes. Most filming was on location in the New York City borough of The Bronx, and at Gold Medal Studios in The Bronx.