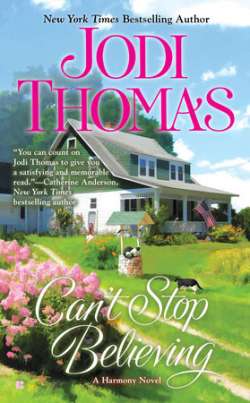 In New York Times bestselling author Jodi Thomas’s small town of Harmony, Texas, “there’s always something brewing" (Fallen Angel Reviews). Now, a generations-old feud is about to come to a head—and the stakes couldn’t be higher with two hearts on the line…

Cord McDowell gave up his freedom at eighteen when he went to jail for a crime he didn’t commit. Now, ten years later, he’s about to give it up again for a piece of land. Nevada Britain, his neighbor, has just made him an offer he can’t refuse: If he’ll marry her, she’ll sign over a section of property that their families have been fighting over for a hundred years. Nevada refuses to explain why, but Cord knows the bargain is in his favor. He just has one condition—she has to sleep in his bed every night for as long as their doomed marriage lasts. Nevada only wants to maintain her family’s legacy—and redeem herself for a wrong she did Cord years ago. But as she spends more time with her husband of necessity, she discovers something unexpected—a love so deep it takes her breath away.