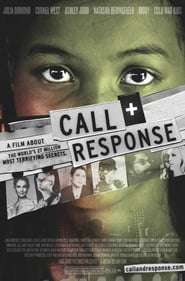 Call + Response is a first of its kind feature documentary film that reveals the world's 27 million dirtiest secrets: there are more slaves today than ever before in human history. Call + Response goes deep undercover where slavery is thriving from the child brothels of Cambodia to the slave brick kilns of rural India to reveal that in 2007, Slave Traders made more money than Google, Nike and Starbucks combined. Luminaries on the issue and many other prominent political and cultural figures offer first hand account of this 21st century trade. Performances from Grammy-winning and critically acclaimed artists move this chilling information into inspiration for stopping it. Music is part of the movement against human slavery. Dr. Cornel West connects the music of the American slave fields to the popular music we listen to today, and offers this connection as a rallying cry for the modern abolitionist movement currently brewing.