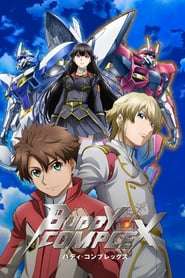 Buddy Complex revolves around the main character, Aoba Watase, an ordinary high school boy. One day, his classmate Hina Yumihara, saves him from being killed by a guy in a mecha that came from the future. Hina revealed that she herself also from the future and then she sends Aoba into the future. When he wakes up, he finds himself over seventy years into the future, where the Free Pact Alliance and the Zogilia Republic are at war with each other, each battling with their own valiancers; and Aoba is on the former's team, teams up with Dio using coupling valiancers Luxon and Bradyon. He also learns that Hina is on the opposing team, and what's even stranger, she doesn't remember him at all.