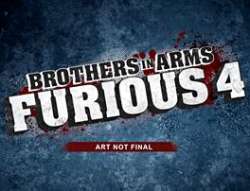 Furious 4 is a first-person shooter video game which was being developed by Gearbox Software. It was unveiled by Ubisoft at their E3 2011 Conference. Originally set to be published by Ubisoft and be part of the Brothers in Arms series, the title eventually became an independent intellectual property for Gearbox Software. The project was ultimately cancelled by Gearbox in July 2015, with many of the gameplay elements transferred to another project, Battleborn.