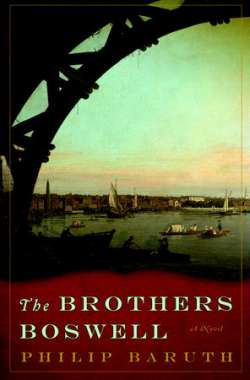 "[An] accurate, original, and entertaining fictional reconstruction."--Boston Globe
<p class="MsoNormal">“Baruth (The X-President) shows his versatility with this chilling literary thriller. . . . The subtle way the author examines his character's twisted mind draws the reader in, as does the evocative prose.”—Publishers Weekly <p class="MsoNormal">“The Brothers Boswell is such an impressive book, both for its ability to inhabit its source material and for how well it shines on its own merits.  Many novels claim to be literary thrillers, but rarely are they quite this literary and quite this thrilling.  Philip Baruth has written a remarkable work.”—David Liss, author of The Whiskey Rebels <p class="MsoNormal">“Meticulously researched, The Brothers Boswell has a strong narrative line, psychological allure, and plenty of adventure. I recommend the book for both the general reader and the aficionado.”—Frances Sherwood, author of Vindication and Night Sorrows

“Ingenious, often hilarious . . . if you can handle a fanciful plot and an onslaught of irreverence.”—The Washington Post Book World

The year is 1763.Twenty-two-year-old James Boswell of Edinburgh is eager to advance himself in London society. Today his sights are set on furthering his acquaintance with Dr. Samuel Johnson, famed for his Dictionary; they are going to take a boat across the Thames to Greenwich Palace. Watching them secretly is John Boswell, James’ younger brother. He has stalked his older brother for days. Consumed with envy, John is planning to take revenge on his brother and Johnson for presumed slights. He carries a pair of miniature pistols that fire a single golden bullet each, and there is murder in his heart.

Philip Baruth is an award-winning commentator for Vermont Public Radio and a graduate of Brown University with an MA and PhD from the University of California at Irvine. His previous novel, The X President (Bantam Books, 2003) received critical acclaim. He teaches at the University of Vermont.