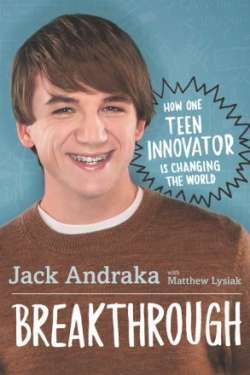 Breakthrough: How One Teen Innovator Is Changing The World

Jack wouldn't give up.

After a dear family friend died of pancreatic cancer, Jack Andraka decided to create a better method of early detection. It took two hundred letters before Jack found lab space to pursue his idea and months of work to make it a reality, but in the end, he did it. Jack's early-detection test for pancreatic, ovarian, and lung cancers has the potential to be over four hundred times more effective than the medical standard and cost only three cents. Jack was fifteen at the time.

Jack's story is not just one of dizzying international success; it is a story of overcoming depression and homophobic bullying and finding the resilience to persevere and come out. His account inspires young people, who he argues are the most innovative, to fight for the right to be taken seriously and to pursue their own dreams. With hands-on science experiments included, Jack's memoir empowers his generation with the knowledge that we can each change the world if we only have the courage to try.