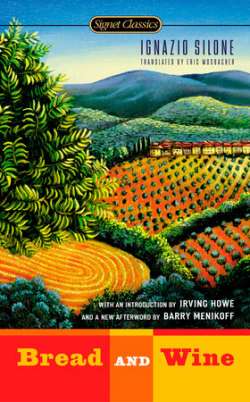 When it first appeared in 1936, Bread and Wine stunned the world with its exposure of Italy’s fascist state, depicting that regime’s use of brute force for the body and lies for the mind. Through the story of Pietro Spina, who returns from fifteen years of exile to organize the peasants of his native Abruzzi into a revolutionary movement, this courageous work bears witness to the truth about any totalitarian regime—a warning as relevant today as it was in Mussolini’s Italy.

Surprisingly tender and rich in humor, this twentieth-century masterpiece brings to life priests and peasants, students and revolutionaries, simple girls and desperate women in a vivid drama of one man’s struggle for goodness in a world on the brink of war. Ranked with Orwell and Camus among writers who insisted upon linking the hope for social change with the values of political liberty, Silone is one of the major voices of our time, and Bread and Wine is his greatest novel. As Irving Howe notes in his Introduction, “Bread and Wine will speak to anyone, of whatever age, who tries sincerely to reflect upon man’s fate in our century.”

Translated by Eric Mosbacher, with an Introduction by Irving Howe and an Afterword by Barry Menikoff