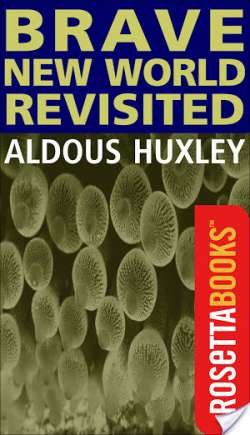 In 1958, author Aldous Huxley wrote what some would call a sequel to his novel Brave New World (1932) but the sequel did not revisit the story or the characters. Instead, Huxley chose to revisit the world he created in a set of twelve essays in which he meditates on how his fantasy seemed to be becoming a reality and far more quickly than he ever imagined. That Huxley’s book Brave New World had been largely prophetic about a dystopian future a great distress to Huxley. By 1958, Huxley was sixty-four-years old; the world had been transformed by the events of World War II and the terrifying advent of nuclear weapons. Peeking behind the Iron Curtain where people were not free but instead governed by Totalitarianism, Huxley could only bow to grim prophecy of his friend, author George Orwell, (author of the book 1984). It struck Huxley that people were trading their freedom and individualism in exchange for the illusory comfort of sensory pleasure--just as he had predicted in Brave New World. Huxley despairs of contemporary humankind’s willingness to surrender freedom for pleasure. Huxley worried that the rallying cry, “Give me liberty or give me death” could be easily replaced by “Give me television and hamburgers, but don’t bother me with the responsibilities of liberty.” Huxley saw hope in education; education that could teach people to see beyond the easy slogans and efficient ends and anesthetic-like influence of propaganda.