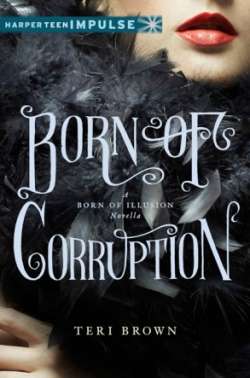 Returning to the atmospheric and mysterious Jazz Age world of Born of Illusion, Teri Brown's Born of Corruption is a 64-page companion digital novella about what happens when New York City's most notorious socialites, mobsters, and bootleggers get together for a larger-than-life scavenger hunt . . . and someone gets killed.

Cynthia Gaylord, a vivacious blonde flapper and the niece of one of the most infamous mob bosses in New York City, loves scavenger hunts, and the one she's putting together for her best friend Anna's going-away party is going to be the swankiest one ever. But then, Anna Van Housen is no ordinary friend. She is reputed to be Harry Houdini's illegitimate daughter and a magician of the first order—and she possesses psychic powers.

Before Anna leaves for a European tour with her vaudeville company, Cynthia throws open the doors of her Gramercy Park mansion for a giant bash, but when one of the guests turns up dead, Cynthia and Anna must join forces to discover the truth. Who is the mysterious dead man? And which of Cynthia's guests could have killed him? Cynthia's relatives in the mob? Or someone related to the Society for Psychical Research, a shadowy group with a dangerous history? Cynthia and Anna have to find out who done it before the coppers are called in . . . something both Cynthia and Anna are eager to avoid.

HarperTeen Impulse is a digital imprint focused on young adult short stories and novellas, with new releases the first Tuesday of each month.