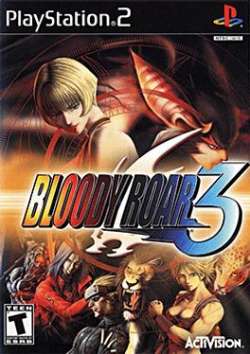 Bloody Roar 3 pits 12 outlandish combatants against each other in one of the most ambitious 3D fighting games to grace the PlayStation 2. Returning from Hudson's widely acclaimed PS1 titles are Stun, Long and Jenny, each of who brings a unique fighting skill to the arena. During each bout, players build an energy bar based on the number of successful kicks and punches they land on their opponent. As the bar fills, players can then morph their combatant into terrifying manimals from beasts such as lions and tigers to moles. The morph, in turn, unlocks a secondary control system specifically designed with each creature's combat moves and appearance in mind. In effect, this offers players two distinct combat types within one game.