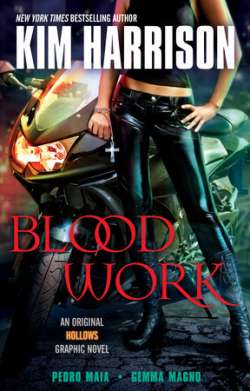 When Ivy met Rachel, the result wasn’t exactly love at first sight. Sparks flew as the living vampire and the stubborn witch learned what it meant to be partners. Now Kim Harrison, the acclaimed author of Pale Demon and Black Magic Sanction, turns back the clock to tell the tale—in an original full-color graphic novel.

Hot-as-hell, tough-as-nails detective Ivy Tamwood has been demoted from homicide down to lowly street-crime detail. As if rousting trolls and policing pixies instead of catching killers wasn’t bad enough, she’s also been saddled with a newbie partner who’s an earth witch. It’s enough to make any living vampire bare her fangs. But when a coven of murderous witches begins preying on werewolves, Rachel Morgan quickly proves she’s a good witch who knows how to be a badass.

Together, Ivy and Rachel hit the mean streets to deal swift justice to the evil element among Cincinnati’s supernatural set. But there’s more to their partnership than they realize—and more blood and black magic in their future than they bargained for.