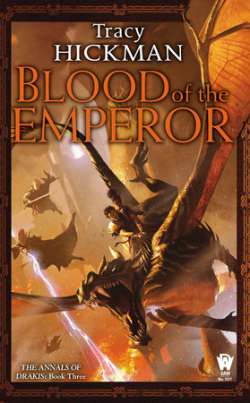 Blood of the Emperor

It appears that an ancient prophecy is about to be fulfilled as the human named Drakis—formerly one of countless warrior-slaves to the elves of the Rhonas Empire—returns from his quest in the North. Flying into the rebel camp with his surviving companions on the backs of the legendary dragons that were once humankind's most powerful allies, Drakis is hailed as the champion of all the slave races. But it is not a prophecy that drives Drakis in his war against the elves and their emperor. Rather it is his burning desire for revenge against the cruel ruler whom Drakis believes has stolen any chance he has for finding peace. And this hatred will set Drakis and his rebel army on a path that may not only bring down the emperor, but Drakis and his entire world as well....