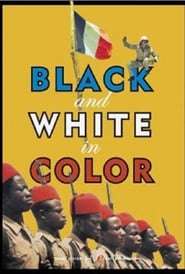 Black and White in Color

French colonists in Africa, several months behind in the news, find themselves at war with their German neighbors. Deciding that they must do their proper duty and fight the Germans, they promptly conscript the local native population. Issuing them boots and rifles, the French attempt to make "proper" soldiers out of the Africans. A young, idealistic French geographer seems to be the only rational person in the town, and he takes over control of the "war" after several bungles on the part of the others.