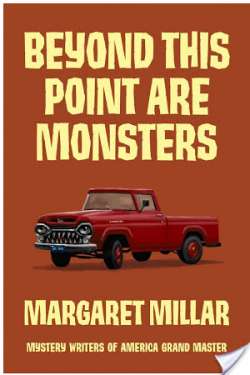 Beyond this Point Are Monsters

The investigation into the disappearance of a wealthy California rancher brings to light the secrets of a whole community in this haunting masterpiece of suspense On a small family ranch outside Boca de Rio, a California city just across the Mexican border from Tijuana, time has stood still for the last year, since the day Robert Osborne, the 24-year-old ranch owner, went out for a walk with his dog and never came home. A large amount of two types of blood was found on the floor of the canteen used by the Mexican viseros, day-laborers hired to work the fields, but Robert's body was never recovered--if he was killed. The sheriff investigating the case pursued the case so tirelessly he couldn't cope with his failure to solve it and quit his job. In the year that has passed, the ranch has languished. Until Robert is declared dead, the ranch's executorship cannot be passed to someone else. His widow, Devon, yearns to move on with her life. But Robert's mother can't accept that her son is dead. Now, at last, the case to have Robert Osborne declared dead in absentia is being heard before the County of San Diego Court. It should be a cut-and-dry ruling--all evidence points to murder. But as witnesses come forward to testify before the judge, secrets of the ranch's past are exposed--secrets of a salacious love affair and a suspicious suicide, of anti-Mexican racism and illegal border-crossing, of alcoholism, indigence, adultery, unwanted pregnancy, even older rumors of murder. Will learning the truth about Robert Osborne allow these wounds to finally heal, or will it only rip open new ones?