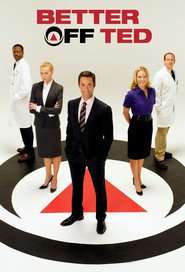 Better Off Ted is an American satirical situation comedy series, created by Victor Fresco, who also served as the show's Executive Producer. The series ran on the ABC network from March 18, 2009 to January 26, 2010. Better Off Ted focuses on the protagonist, Ted Crisp, a single father and the well-respected and beloved head of a research and development department at the fictional, soulless conglomerate of Veridian Dynamics. Ted narrates the series' events by regularly breaking the fourth wall and directly addressing the audience as the show's on-camera narrator. Supporting characters include Ted's supervisor Veronica Palmer, co-worker and love interest Linda Zwordling, his daughter Rose, and laboratory scientists Phillip Myman and Lem Hewitt. The series received critical acclaim, with particular praise going towards its witty and satirical humor. Its second season holds a score of 84 out of 100 on Metacritic. However, despite such positive feedback, the show's debut only drew in 5.64 million viewers and continued to have extremely low ratings. Although many expressed skepticism towards whether or not it would return, the show was renewed for a second season. On May 13, 2010, ABC officially canceled the series due to low viewing figures. Two episodes were unaired in the United States, but are available to view on Netflix, Amazon Video on Demand, Xbox Live Marketplace, and iTunes.

How To Watch Better Off Ted