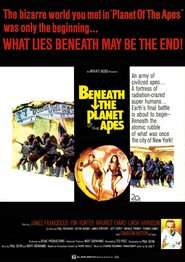 Beneath the Planet of the Apes

Astronaut Brent is sent to rescue Taylor but crash lands on the Planet of the Apes, just like Taylor did in the original film. Taylor has disappeared into the Forbidden Zone so Brent and Nova try to follow and find him. He discovers a cult of humans that fear the Apes' latest military movements and finds himself in the middle. Tension mounts to a climactic battle between ape and man deep in the bowels of the planet.

How To Watch Beneath the Planet of the Apes