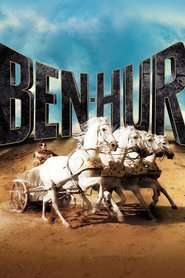 Ben-Hur is primarily based on two spectacular action sequences: the great chariot race and a Roman naval battle, along with lavish production values and strong performances. The plot of Ben Hur revolves around a Jewish prince who is betrayed and sent into slavery by a Roman friend and how he regains his freedom and comes back for revenge. However, instead he finds redemption in Christ, the theme is ultimately about being saved in the Christian sense.

How To Watch Ben-Hur