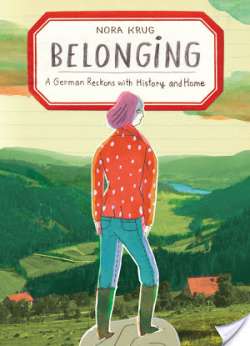 Belonging: A German Reckons With History And Home

Named a Best Book of 2018 by The New York Times Critics, The Boston Globe, NPR, The Minneapolis Star-Tribune, The Milwaukee Journal-Sentinel, Time (Honorable Mention), Library Journal (Best Graphic Novels), and Comics Beat A revelatory, visually stunning graphic memoir by award-winning artist Nora Krug, telling the story of her attempt to confront the hidden truths of her family’s wartime past in Nazi Germany and to comprehend the forces that have shaped her life, her generation, and history. Nora Krug was born decades after the fall of the Nazi regime, but the Second World War cast a long shadow throughout her childhood and youth in the city of Karlsruhe, Germany. For Nora, the simple fact of her German citizenship bound her to the Holocaust and its unspeakable atrocities and left her without a sense of cultural belonging. Yet Nora knew little about her own family’s involvement in the war: though all four grandparents lived through the war, they never spoke of it. In her late thirties, after twelve years in the US, Krug realizes that living abroad has only intensified her need to ask the questions she didn’t dare to as a child and young adult. Returning to Germany, she visits archives, conducts research, and interviews family members, uncovering in the process the stories of her maternal grandfather, a driving teacher in Karlsruhe during the war, and her father’s brother Franz-Karl, who died as a teenage SS soldier in Italy. Her extraordinary quest, spanning continents and generations, pieces together her family’s troubling story and reflects on what it means to be a German of her generation. Belonging wrestles with the idea of Heimat, the German word for the place that first forms us, where the sensibilities and identity of one generation pass on to the next. In this highly inventive visual memoir—equal parts graphic novel, family scrapbook, and investigative narrative—Nora Krug draws on letters, archival material, flea market finds, and photographs to attempt to understand what it means to belong to one’s country and one’s family. A wholly original record of a German woman’s struggle with the weight of catastrophic history, Belonging is also a reflection on the responsibility that we all have as inheritors of our countries’ pasts.