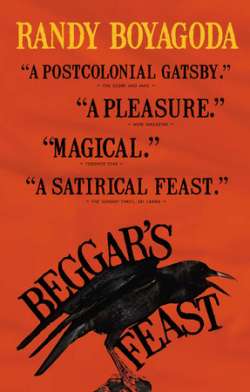 Beggar's Feast is a novel about a man who lives in defiance of fate. Sam Kandy was born in 1889 to low prospects in a Ceylon village and died one hundred years later as the wealthy headman of the same village, a self-made shipping magnate, and father of sixteen, three times married and twice widowed. In four parts, this enthralling novel tells Sam's story from his boyhood—when his parents, convinced by his horoscope that he would be a blight upon the family, abandon him at the gates of a distant temple—through his dramatic escape from the temple and journey across Ceylon to Australia and Singapore, before his bold return to the Ceylon village he once called home. There he tries to win recognition for his success in the world—at any cost.

A novel about family, pride, and ambition, about what it takes for one man to make something out of nothing, set on a gorgeous, troubled island caught between tradition and modernity, Beggar's Feast establishes Boyagoda as a major voice in international literature.