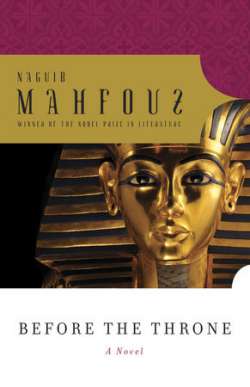 Nearly sixty of Egypt’s past leaders—from the time of the Pharoahs to the twentieth century—are summoned to judgment in the Court of Osiris in the Afterlife, in this extraordinary novel by Nobel Prize–winning author Naguib Mahfouz.

Before the Throne calls forth a parade of those who have shaped the modern nation of Egypt—from the ruler who first unified Egypt in 3000 BC to Anwar Sadat, the president assassinated by religious extremists in 1981, and including figures as various as the famous pharaoh Ramesses II and the medieval vizier Qaraqush. As they defend their decisions under questioning by Osiris, Isis, and Horus, those who acted for the nation’s good are honored with immortality in paradise while those who failed to protect it are condemned either to the inferno or to “the place of insignificance.” Full of Mahfouz’s unique insight into his country’s timeless qualities, this provocative work skillfully traces five thousand years of Egypt’s past as it flows into the turbulent present.

Translated from the Arabic by Raymond Stock