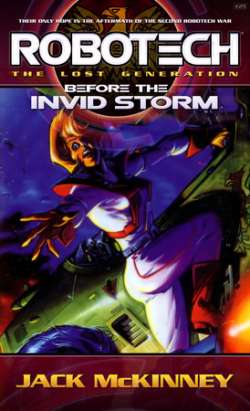 Before the Invid Storm

The second Robotech War ended without victors. The Masters had been defeated, but the Army of the Southern Cross had suffered devastating losses, with Earth's cities reduced to rubble.
Then a heavily armed warship arrived from Tirol and instantly became the object of intense rivalries. To the survivors of the United Earth Government, it was a spear they could hurl into the Invid Sensor Nebula. To the decimated Southern Cross forces, it was the weapon they needed to use against the impending Invid invasion. For the Starchildren it represented escape from their planetary prison, and the Shimada Family wanted it neutralized before it sabotaged their hopes for a peaceful solution.

But no one knew just how dangerous the ship could be. No one, that is, except for its commander, Colonel Jonathan Wolf of the rag tag freedom fighters known as the Sentinels, and Dana Sterling, heroine of the war with the Masters. And Dana had her own agenda...

Set between The Final Nightmare (Robotech #9) and Invid Invasion (#10), BEFORE THE INVID STORM reveals the struggle for control of the dreadnought from Tirol.