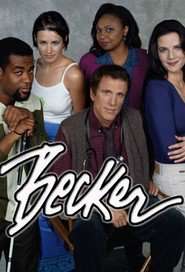 Becker is an American television sitcom that ran from 1998 to 2004 on CBS. Set in the New York City borough of The Bronx, the show starred Ted Danson as John Becker, a misanthropic doctor who operates a small practice and is constantly annoyed by his patients, co-workers, friends, and practically everything and everybody else in his world. He is opinionated and cheap, he smokes, and he doesn't care what any one else thinks. Despite everything, his patients and friends are loyal because Becker genuinely cares about them. The series was produced by Paramount Network Television.