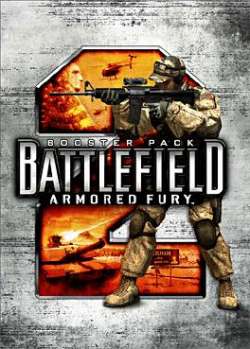 Battlefield 2: Armored Fury adds three new maps, all set in the rural heartland of America where the US forces defend their homeland from Chinese and MEC forces. This Booster Pack will also introduce two new vehicle classes: Attack Jets with the ability to use rocket pods and cluster bombs, and agile Scout Choppers which will reveal nearby enemies. "Midnight Sun" takes place on the Alaskan border, where Chinese forces make landfall. "Operation Harvest" will take the player to the vast open plains of Pennsylvania where only the expert use of air and armor will assure victory. "Operation Road Rage" sees all-out tank warfare on the freeways of America.