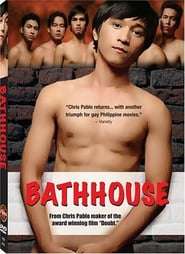 One night while at the baths, young campus nerd Rico (Ray An Dulay) meets heartthrob Cris (Jet Alcantara), the chemistry between them is immediately hot and intense. Once that fire cools Rico thinks he has found the ideal man but finds himself on a roller coaster ride of love, jealousy and infidelity as Cris continues his conquest of the baths. Made in the same guerrilla style of his earlier film, Cris Pablo once again uses striking images and strong characters to tell the story of gay life in the Philippines.