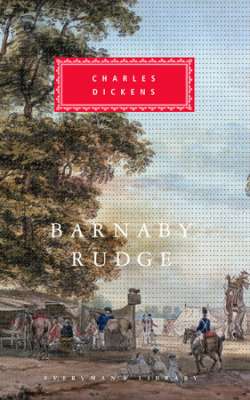 Charles Dickens’s first historical novel–set during the anti-Catholic riots of 1780–is an unparalleled portrayal of the terror of a rampaging mob, seen through the eyes of the individuals swept up in the chaos.

Those individuals include Emma, a Catholic, and Edward, a Protestant, whose forbidden love weaves through the heart of the story; and the simpleminded Barnaby, one of the riot leaders, whose fate is tied to a mysterious murder and whose beloved pet raven, Grip, embodies the mystical power of innocence. The story encompasses both the rarified aristocratic world and the volatile streets and nightmarish underbelly of London, which Dickens characteristically portrays in vivid, pulsating detail. But the real focus of the book is on the riots themselves, depicted with an extraordinary energy and redolent of the dangers, the mindlessness, and the possibilities–both beneficial and brutal–of the mob.

One of the lesser-known novels, Barnaby Rudge is nonetheless among the most brilliant–and most terrifying–in Dickens’s oeuvre.