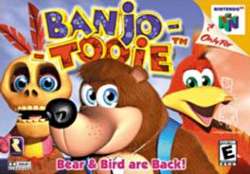 Colossal, immense, and gigantic; beautiful, gorgeous, and grandiose -- these are the words one thinks of when describing Rare's follow-up adventure to Banjo-Kazooie. Keeping consistent with the attitude found in this title, Rare has wittily named it Banjo-Tooie. Banjo-Tooie, simply put, is incredibly unimaginable. The worlds are ludicrous in size, the gameplay is polished and deep, and the soundtrack proves to be an immaculate compliment. When it comes to defining platform-based entertainment, Banjo-Tooie is filled with chapter after chapter of standards. Explore eight giant worlds, solve puzzles and help game characters to unearth jiggys, play as Mumbo, a T-Rex, Submarine, Money-Van, Washing Machine, and more, and learn more than 40 new moves on the way.