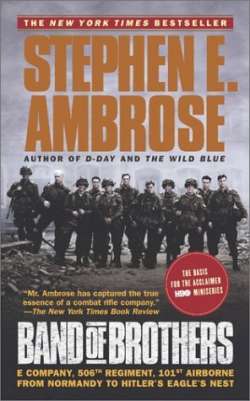 **THE INTERNATIONAL BESTSELLER** The book that inspired Steven Spielberg’s acclaimed TV series, produced by Tom Hanks and starring Damian Lewis. In Band of Brothers, Stephen E. Ambrose pays tribute to the men of Easy Company, a crack rifle company in the US Army. From their rigorous training in Georgia in 1942 to the dangerous parachute landings on D-Day and their triumphant capture of Hitler’s ‘Eagle’s Nest’ in Berchtesgaden. Ambrose tells the story of this remarkable company. Repeatedly send on the toughest missions, these brave men fought, went hungry, froze and died in the service of their country. A tale of heroic adventures and soul-shattering confrontations, Band of Brothers brings back to life, as only Stephen E. Ambrose can, the profound ties of brotherhood forged in the barracks and on the battlefields. ‘History boldly told and elegantly written . . . Gripping’ Wall Street Journal ‘Ambrose proves once again he is a masterful historian . . . spellbinding’ People