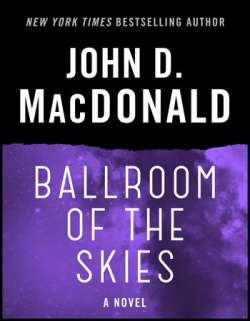 Ballroom of the Skies

Ballroom of the Skies, a classic science fiction novel from John D. MacDonald, the beloved author of Cape Fear and the Travis McGee series, is now available as an eBook.

Have you ever stopped to wonder why the world is eternally torn by war? Why men of goodwill, seeking only peace, are driven relentlessly to further disaster? In a future society, where India rules the globe and everyone chases the mighty rupee, the First Atomic War has just ended. Already the Second is clearly building. People shrug. War is man’s nature, they think. And that’s what newspaper reporter Dake Lorin thinks, too . . . until he becomes aware of the aliens living among us and discovers their sinister purpose—as well as the strange and monstrous explanation for humankind’s seemingly limitless capacity for violence and destruction.

“The great entertainer of our age, and a mesmerizing storyteller.”—Stephen King

“My favorite novelist of all time.”—Dean Koontz

“To diggers a thousand years from now, the works of John D. MacDonald would be a treasure on the order of the tomb of Tutankhamen.”—Kurt Vonnegut

“A master storyteller, a masterful suspense writer . . . John D. MacDonald is a shining example for all of us in the field. Talk about the best.”—Mary Higgins Clark