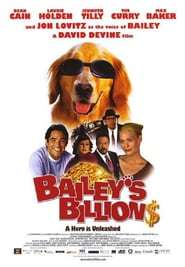 Sweet and savvy talking golden retriever, Bailey, is one doggone lucky pooch when his devoted owner, Constance Pennington, leaves him her entire billion-dollar fortune. Bailey is lucky, that is, until he becomes the target of an elaborately-designed dognap scheme hatched by Constance's nasty nephew Caspar and his money-hungry wife Dolores. The despicable duo's wicked plan is to ultimately gain custody of the canine so they can get their greedy paws on his inheritance. Unfortunately for them, there's a thing or two they don't know about Bailey. Not only does he have great street smarts, he has great pals too. Bailey's loyal guardian Ted, kind-hearted animal advocate Marge, her daughter Sam, and a clever border collie named Tessa set out on a hilarious madcap adventure to free their four-legged friend and put the nasty dognappers out of business-for good!