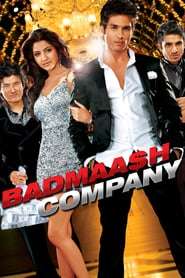 Life in the 1990's was remarkably same for the average Indian. Consumerism had not set in. It was devoid of most of the luxuries of the West. In fact everything "imported" was good, and everything Indian, passé. Badmaash Company is an extraordinary story set in the 1990's in middle class Bombay (as it was known then), of four ordinary youngsters, who came together to start an import business of things longed for by yuppie Indians! What made their venture such a stupendous success was the fact that they found a way to beat the system and soon became the undisputed kings in their business, realizing their one dream of making quick money by doing all the wrong things... the right way! Living the life of champagne wishes and caviar dreams, the four friends discover that to make a business successful you don't need big money. All you need is a big idea!

How To Watch Badmaash Company