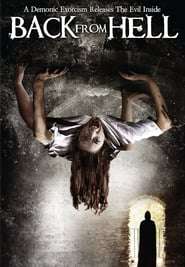 When six pals escape the chaos of the city for a brief getaway, the manor home they rent in the countryside may not be so idyllic after all? The party mood soon sours as strange phenomenon begins. The group initially attempts to rationalize the occurrences, but they soon escalate into horrifying paranormal events and, ultimately, the apparent possession of Giorgio. Desperate, the terrorized group pleads with the local priest to exorcise the unholy force. But its demonic powers may be more than he can handle? and a bigger menace than any of them could have imagined.