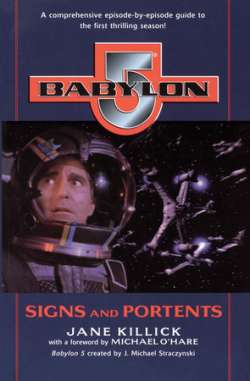 Now in its fifth hit season, Babylon 5--TV's hottest interstellar science fiction phenomenon--has spawned its own series of definitive episode guides! Catch up on all the action, show by show, from the very beginning with the Babylon 5: Season by Season guidebooks.

Babylon 5: Signs and Portents, kicks off with a foreword by actor Michael O'Hare, better known to viewers as Commander Sinclair, and features a fascinating look at how series creator J. Michael Straczynski brought his ambitious vision to the screen.

Then launch into a comprehensive overview of the groundbreaking premiere season, including in-depth, episode-by-episode summaries of all of the first twenty-two shows--from the pilot, "The Gathering," through the climactic season finale, "Chrysalis"--with analysis by author and B5 expert Jane Killick.

Veteran viewers or first-time fans, relive the adventure--or find out what you've been missing--with the complete companions to Babylon 5!