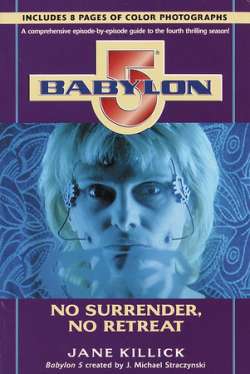 Babylon 5: No Surrender, No Retreat

Now in its fifth hit season, Babylon 5--TV's hottest interstellar science fiction phenomenon--has spawned its own series of definitive episode guides! Catch up on all the action, show by show, from the very beginning with the Babylon 5: Season by Season guidebooks.

Filled with stunning revelations and explosive plot twists and turns, Babylon 5: No Surrender, No Retreat sums up the spellbinding fourth season. Culminating in some of the most dramatic events in television history, Captain Sheridan is pronounced missing and presumed dead on Z'ha'dum, while Delenn feverishly rallies support for an all-out offensive against the invading Shadow forces. Internal strife on Centauri erupts in a shocking and violent betrayal. Garibaldi resigns as Security Chief and turns to treachery, plotting against his comrades. And Earth launches a war against Babylon 5.

From "The Hour of the Wolf" through the shattering finale of "The Deconstruction of Falling Stars," B5 expert Jane Killick's episode-by-episode summaries and analyses capture all the action and intrigue of Babylon 5 circa 2261--"the year everything changed."

Veteran viewers or first-time fans, relive the adventure--or find out what you've been missing--with the complete companion volumes to Babylon 5!