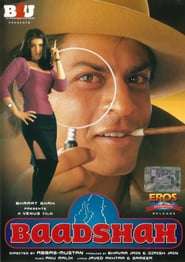 K. Jhunjhunwala would like to locate his missing/runaway daughter, Seema Malhotra, so that he can get her married to Nitin Dharampal; Prominent businessman, Mahindra, would like to negotiate with his daughter, Sonu's kidnappers, and secure her release. And the Central Bureau of Investigation would like to protect the life of Chief Minister Gayetri Bachchan under the mission code-named "Maa", and the CBI Officer in Charge to be code-named "Baadshah". Now Baadshah happens to be a bumbling and out of work Private Investigator, who has agreed to assist Jhunjhunwala and Mahindra, and while doing so is mistaken for the CBI Agent, ends up working for the assassins, and must assassinate Gayetri or end up losing his team of four fellow-bumblers, and Mahindra's daughter. What results is hilarious chaos, with no one knowing what the other is doing, and each one being each other's suspect(s). To make matters worse Jhunjhunwala is not really Seema's dad, but someone else with an ulterior motive.