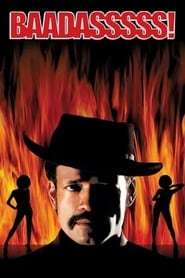 Director Mario Van Peebles chronicles the complicated production of his father Melvin's classic 1971 film, "Sweet Sweetback's Baadasssss Song." Playing his father in the film, Van Peebles offers an unapologetic account of Melvin's brash and sometimes deceptive conduct on the set of the film, including questionable antics like writing bad checks, tricking a local fire department and allowing his son, Mario, to shoot racy sex scenes at the age of 11.

How To Watch Baadasssss!